The Umbrella (2018) is the title of a 21 minute 59 second short film by director Eric Tsang (Hong Kong) who was nominated for the Best Audio Visual Experimental Short award at Minikino Film Week 5 – Bali International Short Film Festival in 2019. Without denying its title which reminds us of the Umbrella Movement in Hong Kong (2014), the film’s narrative is unique in taking a hostel location with a camera treatment that displays the story of each occupant. Eric Tsang uses a long shot, a static tripod and a long take scene from the dormitory’s facade showing together rooms of each of its residents. We can hear dialog and the rain sound describing the ambience, emotions and mindset of each room’s occupant.

The following are two interviews with Eric Tsang in two parts. The first part is an interview via email in February 2020 conducted by Kevin Setya, a student majoring in Film and Television at Dian Nuswantoro University (Semarang) as part of internship work assignments in Minikino in January – April 2020. The second part is an interview transcript conducted by Fransiska Prihadi (Minikino program director) at Clermont-Ferrand’s 35th Short Film Market. Eric had just returned from Sundance Film Festival 2020 (Park City, Utah, United States) where his latest short film, A Thousand Sails (2019) was screened there. The film also won a Jury Award at the Sundance Film Festival Hong Kong Short Film Competition in the previous year.

Kevin: I see several layers of society, with a different way of thinking treatment. The film complexity makes The Umbrella taste rich. If you are positioned in the Dorm, where would you be located?

Eric: In fact I don’t have special attachment to any of those characters as I always position myself as an observer, i.e. the one who tells the story. But I did live in that student hall when I was in university. I have experienced similar situations so every one of them is also a reflection of me as the author.

Kevin: The film depicts protest from so many classes of society, such as teenagers who bought a new iPhone and were given the advice not to interfere, but in the next room there are people overwhelmed by the protest. Is there any obvious class division in society related to their income status? How does it relate with the protest and how the parents try to control their children? Eric: We have very few people living under the poverty line in Hong Kong so extreme cases can rarely be found. But we have the biggest economic inequality in the world. We ranked no. 1 for the index. What a shame. Besides economic inequality, people are also segregated by race, sexuality and generations which are causing the division. Protests will only happen when there are serious conflicts between people. And conflicts come from unsolvable injustice. So to me when I think about social movement I will tend to examine it fundamentally.

Kevin: This film has a long take camera treatment which is often found in shooting for sitcoms. I feel it illustrates how long the protests took place at the time. What is your motive in choosing that camera treatment?

Eric: You see at the end I am implying an incident of student suicide. I always think that it is always very complicated to explain what is causing one to commit suicide. The one-take treatment is avoiding editing because I think editing is somehow about making strong causal explanations of a sequence of events which may not be what happened in reality. That’s why I hope to create just one shot in which one can get closer to the whole picture.

Kevin: How do you think filmmakers contribute in giving voice to public issues such as umbrella movement? Do you also voice out the similar issue in your previous or future project?

Eric: I think artists should always be honest. It is not necessary to voice out but if there is something that you want to express, just don’t hide it. Cika : This is the fourth of February 5:29, and I’m with Eric Tsang. Let’s talk about your new film, when did you finish it?

Eric : Yea, you mean the short film, or feature film?

Eric : It’s called A Thousand Sail. It’s a 15 minutes short drama, and I’ve just finished in 2019 and then, it premiered at Sundance. I’m so happy about it, because I didn’t expect the selection

Cika : Was it completed before or after MFW5?

Eric : I finish it in summer around July-August 2019. So it’s completed before MFW, but the selection (for Sundance) is in December 2019.

Cika : Where were you when you first read the email from Sundance?

Eric : Just woke up at home

Cika : Really? And how did you feel?

Cika :Did you read it two or three times just to make sure it’s not a prank?

Eric : Yes! The programmer wrote because my short film actually won a prize at Sundance Hong Kong short film competition, but it was not a guarantee for the (Sundance) selection. But then, if I won the 3 prizes,they will nominate me to the real Sundance. So I may have the chance to get into the official selection, but then when it comes true it was just very exciting. Sundance is really respectable.

Cika : Precious! How many films from Hong Kong selected for Sundance this year?

Eric : My film was the first from Hong Kong over some years to be selected in the narrative international short film at Sundance. There’s another one short doc, and one animation.

Cika : So, back to when you were waking up and you read the email..

Eric : Yes I read the email from the programmer, Mike, and it’s just a very simple email.  I am happy to have my film in the program.

Cika : How do they screen your film in their program?

Eric : In the short program 3, and there are 4 screenings over the festival period

Eric : Yes in competition. There are 4 programs and if I remember correctly, there are 19 narrative International narrative short films, and mine is one of them.

Cika : What is the toughest question from the audience at the Q&A? Eric : They are very kind, they didn’t give me very difficult questions. Audiences at Sundance support the artist. They just want to know more about the concept, the process and about the theme. They didn’t give me difficult questions, just a very straight forward question. They think the theme is beautiful, and they ask about why I am using long shots.

Cika : Are you using long shot again, just like in The Umbrella?

Eric : Yes, but not one shot. I keep the long shot style. I used one shot for every scene. The whole theme is a compile of around 10 shots. The audience are curious why I choose this and I can because I think the context is very important and I hope there space for the audience to immerse them self into the film give more space to people do thing, and yeah, they like the cinematography, and they like the performance of the actors, this time I use many improvisation, and I don’t really have a script. I went to the location, I have some settings, I have some tasks for the cast, and then they just improvised. I really enjoyed it a lot.

Cika : So did you work in a small crew?

Eric : Yes. I finished it in 2 days, and because I used a long shot, I just finished editing in one day. But feature films are much more complicated.

Cika : Please tell me more about your upcoming first feature. How long have you been working on the script, and how long until you got the funding?

Eric : Hong Kong has a first feature film scheme. This year, they selected around 2 or 3 projects and gave  full funding for projects from the first feature director. It’s the government’s money, so they don’t need any return and the director owns the copyright. It took me around a year to develop the script with my partner and then we submitted to the competition. And we got the funding! The story is about a three generation family in Hong Kong. How they get together for dinner. People in Hong Kong have the winter, and every year at a particular date, the whole family gathers home for dinner. But you know families always have many relationship problems and generation problems between father and son, mother and son, and couple. So many problems, all come together. My story was supposed to capture a week before the festival about a family in Hong Kong and I planned to finish it in early 2020, but it is now delayed because of the protest and virus problem in Hong Kong. I need to change a bit in the script because Hong Kong has changed. I need to reset the background of the story, putting the recent situation in Hong Kong into the context. It will probably take me a few more months to finish the script.

Cika : So you were writing about Hong Kong before the protest

Eric : Yes, the first script was finished before the movement.

Cika : Do you already have a cast?

Eric : I have some people that have some theatre background, but not superstars. I can work with casts that really spend time on the script and can really understand what they need to convey to the audience. I hope I can really finish it this year.

Cika : I wish you all the best for the feature. Are you going to make another short?

Eric : I keep the idea in my mind, maybe after the feature I would like to do a TV Series about mental health in Hong Kong. Something like an anthology. But it’s just an idea that I hope can be turned into a series. If there is a chance to make a short, surely I’d like to make one. Short is fun, hehehe

Cika : so, I have not actually got the chance to sit and relax with you during Minikino Film Week last year. What’s your experience attending the festival?

Eric : I love Minikino. I really like Minikino.I keep recommending the festival to people that I met at Sundance, some people from Taiwan. He is also a programmer, so I said you should go to Minikino to see what is happening in the fest. Because I think the festival is new,but I enjoyed staying there, and I like the curation. I like the many educational workshops, panelists, and long Q&A sections, and there are many cinemas spread on the island. And yeah I think the whole setting is very sustainable. It is not only about showing movies, but also cultural exchange. It’s also about education and sharing. There are not too many audiences for now, but I think it’s not too important, because the most important is the objective of the festival. I really think that Southeast Asia is still underdeveloped in terms of the industry and also the festival circuit. I think more people will need more content for Southeast Asia. I hope I can return to Minikino.

Cika :  Yeah I got the strong feeling you will. I also remember your wife. I didn’t get the chance to talk with her, but is she also in the film industry?

Eric : No, she is actually a tattoo artist

Cika : What does she think about Minikino Film Week?

Eric : Sorry to say this, but she loves Bali because of the resort, very cheap food, ocean, and the vacation. She also thinks that people are very nice there. She enjoyed the ceremony where we watched films outdoors. She found the venue very beautiful. 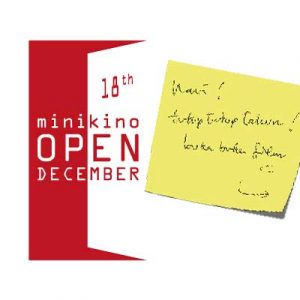 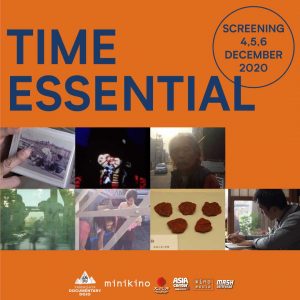 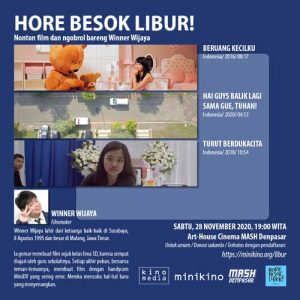 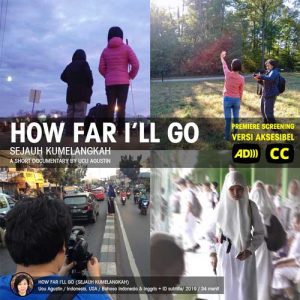